For women who have lost breast size or with breasts that have become droopy because of childbearing, age, and/or weight loss, a combination breast lift and breast augmentation is usually the most effective method for breast enhancement.

Though in some cases of very minor breast ptosis, an implant can inflate and lift the breast adequately, most women with significant ptosis and insufficient breast size require a combined breast lift and augmentation to achieve optimal results. An implant is used to increase the volume, proportion and upper breast fullness. The breast lift is used to reshape the breast, elevate the areolas and to remove extra skin. 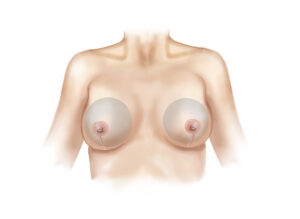 Vertical Breast Lift and Augmentation: Here is the vertical breast lift and augmentation after the implants have been placed and the incisions are closed. Note the scar around the areola and down the center of the breast in the shape of a lollipop. The first few weeks after surgery implants are slightly high on the chest and the lower breast is flat and tight.

The mastopexy-augmentation techniques available are like those used for mastopexy alone. That is, areolar, vertical and inverted-T breast lifts are all used with augmentation.

For women needing a small lift and additional breast fullness, a combined circumareolar breast lift and breast augmentation is the preferred treatment. This technique is also called a Benelli or donut mastopexy-augmentation. This breast lift is limited in the amount of excess skin that can be removed and is essentially used only to reposition the areola. First the breast augmentation is performed through an incision in the breast crease. The circumareolar breast lift is performed by first reducing the size of the areola to about 1.5 inches in diameter. Next, the outer layer of extra skin around the areola is removed. The areola is slid into an elevated position by closing the skin around the areola like a purse string and suturing the new skin edges together. 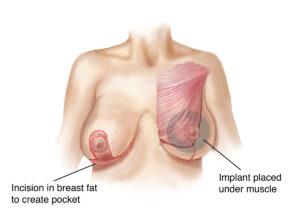 The inverted “T” breast lift results in removal of skin from around the areola, down the center of the breast and from the lower portion of the breast. The areola remains attached to the breast tissue, nerves, and blood vessels. This technique is used in moderate to severe cases of breast ptosis.

Vertical breast lift and augmentation is for women with inadequate breast size and mild to moderate breast ptosis. With this technique, a central, vertical key-hole incision is made. Once the skin is removed, a breast implant is placed through the lower part of the cut-out. Often, the deep layer of the breast tissue is sutured together to shape the breast. Finally, the areola is slid into a higher position and the skin is closed around the areola and down the center of the breast. The final scar is like a lollipop, with a scar around the areola and straight down the center of the breast to the breast fold. On occasion, a small transverse scar is placed in the lower breast fold to help smooth out the closure.

The inverted “T” breast lift and breast augmentation is for women with moderate to severe breast ptosis. The inverted “T” mastopexy is widely used for combined mastopexy and augmentation procedures. With this design, the scar is the shape of an up-side-down “T”, with scars in the middle and across the base of the breast. Like nearly all methods of breast lifting, this procedure also results in a scar around the areola. This technique is also called a Wise pattern mastopexy and an Anchor pattern mastopexy. 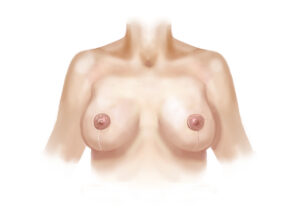 Full Breast Lift And Implants Indications: This figure shows the results of an inverted-T breast lift after several weeks of healing. The upper breast fullness and swelling have resolved, the breast tissue has “dropped”, and the lower poles of the breasts have rounded out.

We are at the forefront of providing breast lifts without surgery! This technique uses the skin tightening technology Thermi Tight. With Thermi Tight a small probe is passed under the breast skin, through tiny openings in the areola. The tissue is then carefully heated using radio-frequency energy. Implants are then placed.

The heating causes some immediate skin contracture and then progressive skin tightening in the following months. As the breast skin shrinks, the breast tightens, the areola moves upward, and the breast if lifted. This technique is used in patients with mild ptosis. It is also a nice option for women with one-sided ptosis, to help lift the ptotic breast and create more symmetry with the normal breast.

“Immediately when I met Dr. Connall, he felt like a friend. He just made me feel so comfortable that I knew right away this is who I wanted to pick.”

It is important to note that mastopexy and breast augmentation can be approached in a “staged” fashion. In a staged approach, one procedure is performed alone and the results are assessed. If the other procedure is then desired, it is performed 3-6 months after the first.

The staged approach is nice for women with minor breast ptosis, or mild breast asymmetry that may be happy with augmented, but slightly saggy breasts. In such cases, breast augmentation is performed first and the breast lift is performed later, only if desired by the patient.

Mastopexy alone can also be performed in patients that are not certain they need the additional volume from an implant. In these cases, the mastopexy is performed first and the breast augmentation is performed months later, only if desired.

In most cases where a breast lift and breast implants are clearly desired, we combine the procedures as a single operation. Our surgeons will discuss these options with you in detail during your consultation.

Most women desire full upper breasts from a mastopexy. However, breast lift alone is limited in creating upper breast fullness. That is where a breast implant can help. However, some patients do not want implants, or they don’t want a great increase in size that an implant can cause. In such patients, fat grafting to the upper portion of the breasts is a great solution. First, the mastopexy is completed. Next, liposuction is performed to “harvest” the fat. The fat is then injected into the upper-half of the breasts, creating more fullness and cleavage without greatly increasing breast size. As a leading fat grafting surgeon, Dr. Connall has extensive experience with this approach and lots of patients happy with their results.

If you are have breast ptosis, a breast lift and augmentation may be right for you! Contact our office in Portland for more information or to schedule a consultation at (503) 783-0544.

MAP IT!
Request an Appointment