The aesthetic importance of the buttocks cannot be underestimated. Since the beginning of time the buttocks have been a key element to a woman’s allure and sexuality. In the last decade, popular culture has emphasized the beauty of optimal buttock shape and size.

The buttocks are one of the most important features of the female body and can now be enhanced in shape and fullness with plastic surgery. The most effective way to enhance the buttocks is to inject fat. With micro-fat grafting techniques, the areas surrounding the buttocks are sculpted with liposuction and the fat is then prepared and injected into the buttocks to achieve a more beautiful and firm shape. For any woman that is bothered by the shape of her buttocks, buttock fat grafting may be a great option.

In addition to buttock fat grafting, the buttocks can be lifted and shaped by removing excess skin and fat. These buttock lift procedures are usually performed in concert with a transverse thigh and buttock lift. 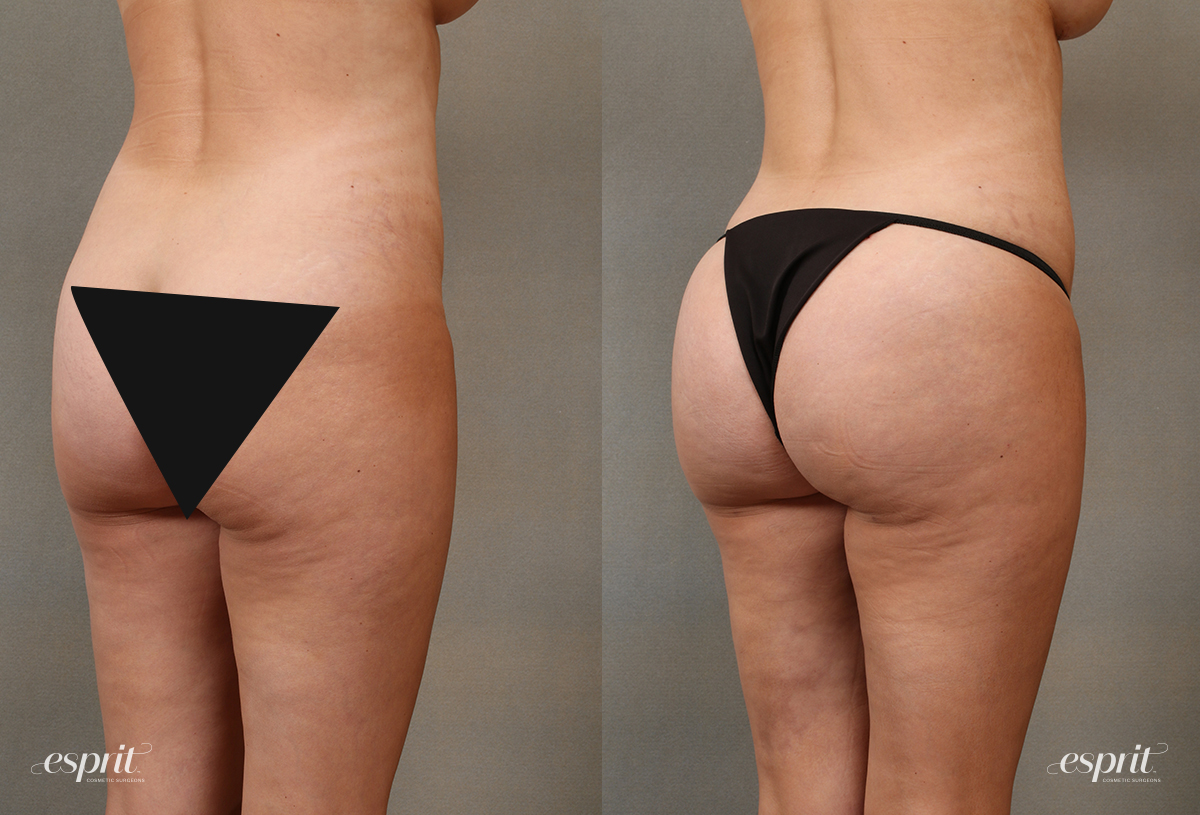 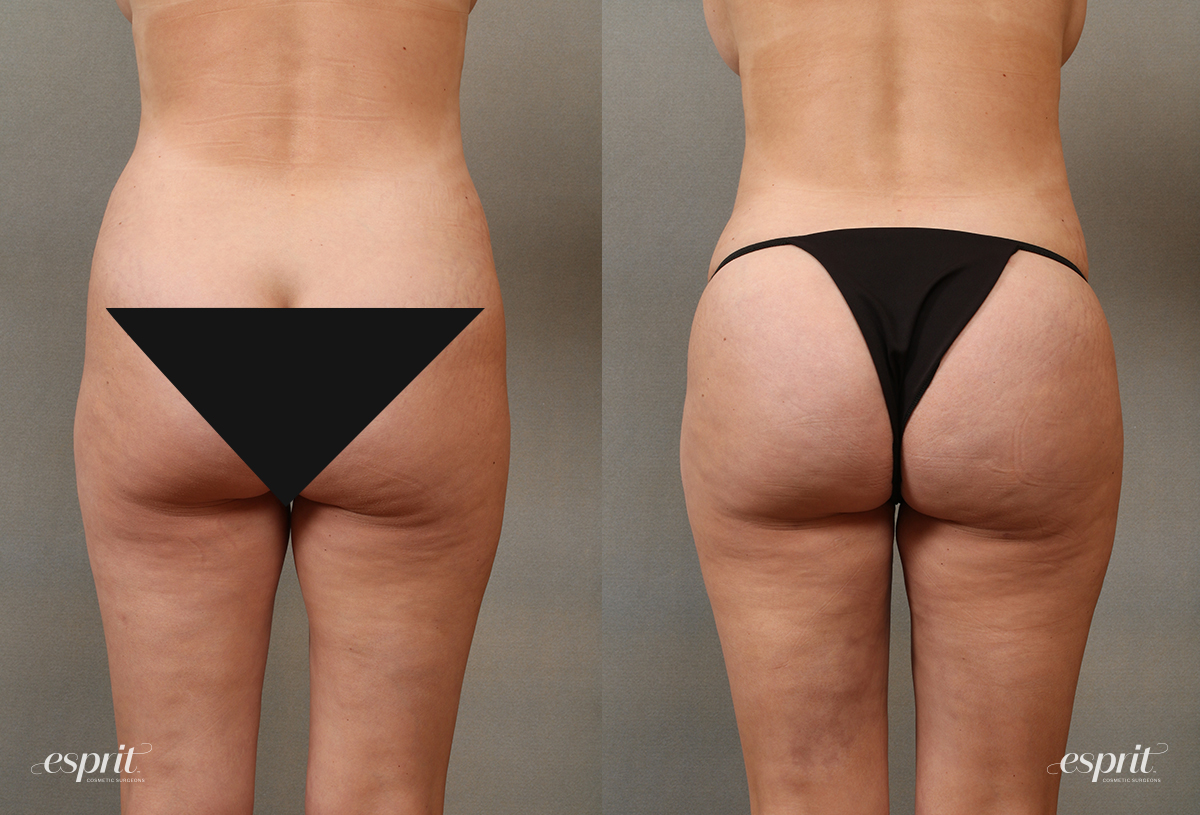 Is Buttock Augmentation Right For Me?

For those women who have small buttocks based on their natural development or weight loss, increased shape and projection can be a great option to improve their figure. For any woman that is bothered by the shape of her buttocks, buttock fat grafting may be a great option.

The entire staff at Esprit Cosmetic Surgeons has experience in performing buttock augmentation with fat grafting. Indeed, we are the most experienced buttock fat grafting center in the Portland, Oregon and Southwest Washington. We are dedicated to using our expertise to help our patients achieve excellent results.

The first step in buttock augmentation is obtaining the fat for grafting. We use the Body-Jet liposuction machine. The Body-Jet liposuction machine is an optimal device for removing fat to be used for buttock fat grafting. The Body-Jet has a spray of water at the tip of the cannula, which gently dislodges the fat and washes it away through the cannula. This fat is then collected in a special filtering system and transferred to syringes for augmentation. Because the Body-Jet is a gentle method of liposuction, the fat cells have less disruption compared to conventional liposuction techniques. The Body-Jet provides more intact and healthy fat cell transfers which optimizes the chances for maximum fat survival.

The fat is then injected with small needles though small openings. Most of the small openings are placed within the bikini line and are less than 2 mm in diameter. These heal well and the scars fade over time. The fat is injected into the fatty layer of the buttocks in a precise fashion to shape the buttocks to the patient’s specific wishes.

Planning The Shape Of Your New Buttocks

There are cultural and ethnic differences in desirable shape and size of the buttocks. It is critical for each patient to identify the specific goals she wishes to achieve with her Brazilian buttock lift with fat grafting. There are generally five shapes to consider. First, is a full and round Caucasian buttock. Second, is the trim and athletic Caucasian buttock. Third, is the buttock shape of Hispanic patients, which are very full and round. Fourth, is the Asian buttock that is round and full in the central area, but trim at the outer thigh regions. Fifth, is the African-American shape buttock, which includes a large amount of fullness and accentuation of the curve at the upper aspect of the buttocks at the lower back.

Your Recovery From Buttock Augmentation

Our entire team is experienced with this exciting procedure.

Your surgery will be performed under general anesthesia and you will be awake immediately after surgery. While in our recovery area, you will be able to drink water and have a light snack. Your recovery in the surgery center will take about one hour. You will be wearing a compressive garment over the buttocks and other areas of liposuction to provide gentle support and to hold the dressings in place. You may go home immediately after you are discharged.

Expect to take about a week off of work and home activities after your buttock fat grafting procedure. The areas of liposuction and the buttocks will be tender and sore. You will need to take narcotic pain medicines for the first few days after surgery. You can shower the day after surgery. We ask that you avoid sitting or lying on your back to minimize the pressure on the buttocks. We recommend avoiding pressure on the buttocks for the first seven days after surgery. This will minimize the pressure and trauma on fat, which will optimize the in-growth of the newly transferred fat.

You will have mild swelling in the areas of liposuction. The buttocks will have significant swelling and some bruising. The majority of this swelling will decline in the first six weeks, which is when you will begin to see your results. However, it will take a full 3 – 6 months for the swelling to resolve, the tissues to fully heal and remodel, and for the final assessment of the grafted buttocks.

The most widely accepted method to enhance the shape, size, and firmness of the buttocks is fat grafting. By using a woman’s own fat, the buttocks can be reshaped in a completely natural fashion. The resulting fat is placed in very small threads so that the fat survives and leads to natural and soft tissue in the buttocks.

Buttock augmentation with silicone implants has been performed for years. The technique has progressed and the implant materials have improved; however, the procedure is limited. Buttock augmentation with implants limits the size increase that can be achieved and leads to a significant scar in the buttock region. The extensive surgery needed for placement of the implants can also lead to wound healing problems, infection and other complications. The downfalls of buttock implants are the reason fat grafting has become the preferred method of buttock augmentation. The greatest limitation of buttock fat grafting is the amount of fat on a patient’s body available for liposuction and transfer to the buttocks.

See The Results Of My Buttock Augmentation

Enhance, shape and add fullness to your backside with a Brazilian Butt Lift. Contact us to schedule your Brazilian butt lift consultation at our office in Portland. Call (503) 783-0544.

At Esprit Cosmetic Surgeons, we are dedicated to providing personalized, nurturing care for every patient. Our experienced doctors strive to provide Portland patients with beautiful, natural-looking results through our effective and state-of-the-art cosmetic surgery procedures. Call us today to book your initial consultation or simply learn more!

Esprit is open for surgery!
We have extensive safety measures in place to ensure your office visits and surgery are performed safely. Our patients still have the option to experience virtual consults from the comfort of their home. Be assured, these virtual consults are highly informative and extremely fulfilling for new patients.

We look forward to seeing you soon!
Dr. Connall, Dr. Salisbury, and the Esprit Team